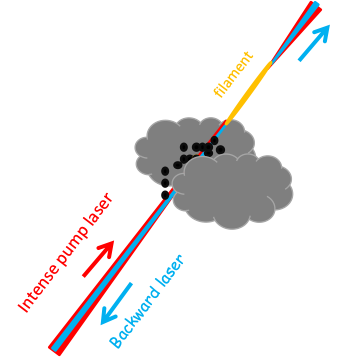 A cavity-free laser in the sky could lead to revolutionary improvements in optical remote sensing for atmospheric science. Abundant in air, nitrogen molecules are prime candidates as an active medium for such a laser. Nitrogen molecules, when pumped by an intense femtosecond laser, exhibit an important optical gain in the near UV regime.  We reported intense forward emission around 391 or 428 nm with energy up to several microjoules was observed during filamentation of femtosecond laser pulses at 800 nm wavelength in atmosphere. Despite numerous works, the physical origin of this lasing is still not understood and subject to controversies. We recently proposed a consistent interpretation of all experimental facts by introducing a concept of lasing without population inversion. Efforts were also made to try to obtain backward lasing emission from excited Nitrogen molecules from the filament.