Over the years, the UPX team has built a solid experience developing and working with coherent extreme-ultraviolet sources. Among those, laser-driven soft X-ray lasers are able to produce short pulses with an outstanding beam quality at the laboratory scale.

How it works: The core of a laser-driven soft X-ray laser source is a population-inverted plasma pumped by collisions. The source developed at LOA is based on controlled optical-field ionization of a neutral gas (krypton) up to the required ion stage (Ni-like krypton). Hot electrons of the plasma then collide with the ions, bringing enough energy to pump the population inversion between specific excited states. A strong amplification of spontaneous emission (ASE) is then produced at 32.8nm within a single pass in the amplifier. Seeding the amplifier with an external resonant radiation such as a high-order harmonic pulse leads to a tremendous enhancement of the spatial features of the beam.

In 2015, we performed the first amplification of a circularly-polarized harmonic seed beam, and experimentally demonstrated that a strong increase of the plasma amplifier density led to generation of sub-picosecond soft X-ray pulses. (A. Depresseux et al., Phys. Rev Lett 115, 083901 (2015), Nature Photonics 9, 817-821 (2015)) 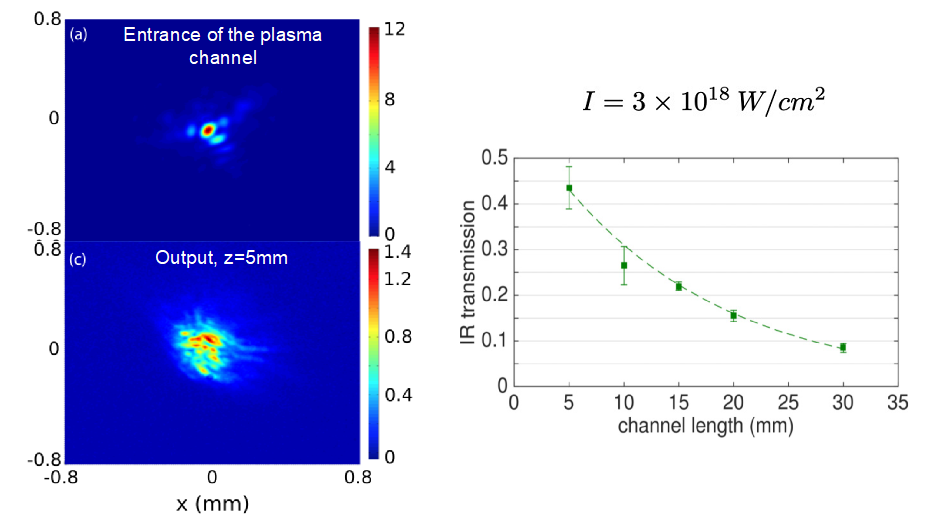 We have successfully implemented a waveguide by focusing with an axicon lens a sequence of “ignitor” (130 mJ, 30 fs) and ”heater” pulses (690 mJ, 600 ps) delayed by 600 ps. When injecting a 5×1018W.cm-2 laser pulse into the waveguide, the electronic density growth up to more than 1020cm-3. The transmitted beam is multimode and contains about 50% of the initial energy after 5 mm of propagation and decrease down to 20% after 20 mm when krypton is used. In parallel to the experimental measurements, intensive numerical calculations using hydrodynamic and particle-in-cell codes has been performed to understand and predict the creation and posterior evolution of the waveguide (E. Oliva et al., Phys Rev. E 97, 023203 (2018), E. Oliva et al., Phys. Rev. A 92, 023848 (2015)). 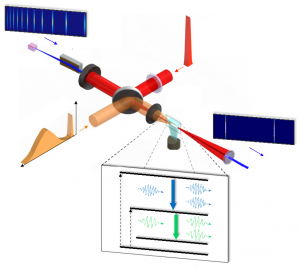 The ability to operate X or soft X-ray coherent sources in a two-color configuration plays a key role in further development of pump-probe techniques. We have developed a table-top two-color soft X-ray laser source using a laser-driven plasma of nickel-like ions. We have shown that thanks to the high electron density in the plasma, besides the usual 32.8nm lasing transition in nickel-like krypton, stimulated emission can be triggered simultaneously on a neighboring radiative transition at 62.7nm, yielding a strong dual wavelength ASE signal. We found out that the gain dynamics of both transitions are comparable. The amplifier was seeded by a doubly resonant high-order harmonic pulse, producing a two-color short-duration and coherent laser beam. Both transitions offer similar prospects of pulse energy and duration and could lead to the delivery of intense and ultrashort two-color coherent soft X-ray pulses with a controllable delay (F. Tissandier et al., Phys. Rev. Lett. 124, 133902 (2020) 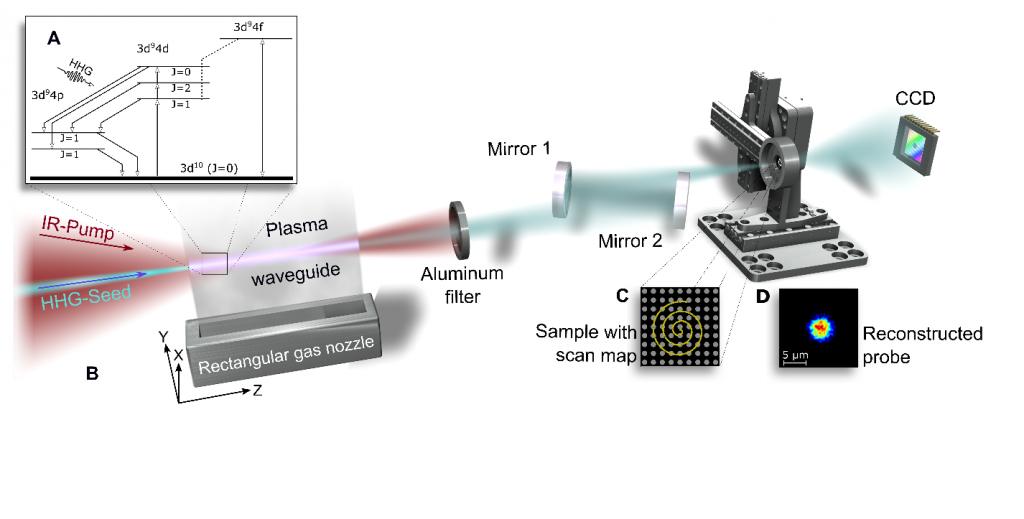 This work results from a collaboration with M. Zürch’s team at the Institute for Optics and Quantum Electronics of the University of Jena. Using a ptychographic approach, we were able to reconstruct the complex wavefront of the seeded EUV laser wave. The EUV beam was focused onto a sample consisting of a regular hole pattern. The coherently diffracted light is recorded in a transmission geometry and the sample is scanned using a ptychographic method. This allows retrieval of the complex field in the sample plane, which was backpropagated to the exit plane of the amplifier. The backpropagated field exhibits a parabolic phase profile and a two-peak amplitude profile which are related to the inhomogeneous gain distribution in the amplifier. Its shows an excellent agreement with extensive 3D Maxwell-Bloch calculations.